Leaving Istanbul was difficult- after almost two weeks there we’d gotten very comfortable in our friendly ‘Magic Bus’ hostel with all it’s interesting characters coming and going. There were so many winding back streets to get lost in, full of exciting music shops, art, cafés etc that I was secretly pleased we had to wait around for our Uzbek visa from the consulate there (although, of course, we still don’t have it so the waiting was just an illusion that provided us with a guilt-free long rest in this vibrant city). I don’t think I’ve ever been inside a building as breathtaking as the Haiga Sofia. If it were considered socially acceptable I would lie on my back in the middle of the floor and stare up at the ornate walls and ceiling all day long, daydreaming about Byzantine and Ottoman empires and the fall of Constantinople.

Our lazy legs were definitely not prepared for the steep hills of the Black Sea coast road that awaited us from Şile onwards, and we crawled along in the heat for two days before being easily convinced by our Warm Showers host, Ethem, to have yet another day off! We spent a memorable day exploring the secret coves and cliffs around his village, daring each other to swim in the raging stormy sea (I managed as far as sitting at the edge of the water and shrieking as the waves crashed over me) and making videos with his drone camera (a remote control helicopter with a camera attached, that sent the boys into a frenzy of excitement). It was Joe’s birthday, so we had a birthday picnic for him in a cave to sit out the storm.

After only half a day back on the road, we were stopped by the police…oh dear. We timidly pulled over trying to think what we could have possibly done wrong. I wasn’t wearing my helmet in the heat, but surely that was allowed? Our anguish was all for nothing though as their window wound down and two beaming smiles appeared, followed by two bottles of ice cold water which they handed over to us and drove off! Thanks police! Later on that afternoon we bumped into Lander, who is cycling from his home in the Basque Country in Spain all the way to Tokyo. We realised that we were heading along the same route for a few weeks, so decided to cycle together. Actually, it was beginning to look like he was a bad omen as since we met him, in the short space of a week, we had a series of unfortunate events: Joe got stung by a jellyfish and his body became covered in a plague of itchy red circles; we both fell off our bikes (don’t worry- we were each going at about 5km/ hr at the time so no lasting injuries); Joe got two punctures; our stove pump broke and as if that’s not unfortunate enough, we managed to break the porch pole for our tent as well! Definitely failing at adventure school right now.

Despite this freakish string of bad luck that he seems to bring, it’s been great having Lander with us. He taught us how to slip stream so we’ve been pushing ourselves trying to keep up with him and getting fit as a result. Wild camping is always more relaxing when there are more of you as well, and he has so much energy that usually by the time we’ve dragged ourselves panting to the top of the mountain as the sun is setting, he’s already assessed the area and found us a perfect camping spot (what a fatherly figure)!

Camping above the clouds

At Ereğli, we decided to turn inland for a while- partly for some variation and partly because thenext section of the coastline would be incredibly steep, and now that we’re racing against winter, we can’t really afford to go that slowly unfortunately. I don’t regret it though, as our inland route took us through stunning forests, valleys, quiet villages and later on in the week the landscape morphed into desert-like stretches with rocky mountains all around us. We also escaped the rainy season of the coast this way, and were treated so some of the most scorching days so far.

Without fail, whenever we stopped in a village, within minutes we would be presented with steaming glasses of çay by the locals, who refused to accept any money. I’m even permitted to sit in their çay salons despite being female. These type of cafés are everywhere in Turkey, and are exclusively for men. We have started referring to them as the ‘busy men’s clubs’ as they are always filled with men enjoying long afternoons drinking tea, solving the world’s problems and playing board games, while the women are at home (actually working hard). We’ve been surprised at how conservative the villages actually are here- sometimes we like to play ‘spot the woman’, as very often you will only see men in the streets and shops. Although things are a lot more relaxed in the cities, we were still surprised whilst in Trabzon last night to walk into a bar (for a well earned celebratory drink) and find that half of the bar was segregated for men exclusively, and the other half mixed. (It was tempting to ask where the womens’ section was but I thought better of it).

The infamous Turkish hospitality has definitely lived up to it’s reputation. Whenever we couldn’t find a place to camp in time for sunset (which is now so early that we’re finding ourselves asleep by half past eight each night in the tent) we have been welcomed into the homes of people in villages (and even once in a city). We spent a really memorable evening with a huge family, after getting desperate and asking if we could pitch our tent in their field. Minutes later, we found ourselves sitting around their table being presented with a feast, laughing and joking with the cheeky little boys who knew a bit of english. Half the village turned up to have a look at the strange arrival of three foreign cyclists, and when it came to pitching the tents, everybody wanted to help. I can’t say I’ve ever blown up a sleeping mat with the help of three enthusiastic children holding each corner and staring at me intently before. Another family who invited us in in a similar way entertained us after dinner (fish on the BBQ that they’d caught earlier that day) by performing the traditional dance of the Black Sea coast, which involved a combination of delicate foot steps, stomping and hand holding. I can’t say that Joe and Lander were much good at it! 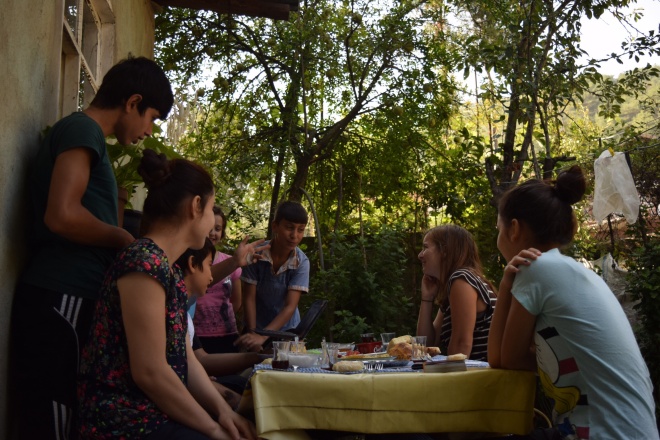 A musical performance in our honour

Unfortunately, the coastal road from Samsun eastwards is hideous. We rejoined it here as we missed the sea and had heard it was flat, which was true, and we were able to get some really long days in of 120km (a record distance for us), but psychologically it has been a draining few days with nothing very inspiring to motivate us. The road is basically the equivalent of a motorway that runs more or less directly on the coast, leaving no room for any sort of beach or forest for camping. The towns are pretty sad looking also, with huge landfill areas right on the shoreline, smelly and polluting the water. If anybody else is planning to cycle this way I would strongly recommend going inland rather than take this road, unless you need a direct and speedy route. I suppose it can’t all be a dream come true…

Turkish people will nearly always try to help if you need it (and often if you don’t). In fact, if there’s something specific you need, they won’t rest until you have found it. For example, this morning Joe went on a mission here in Trabzon to find a laundrette. (As he needed to wash basically everything he owned, he was wearing an unusual combination of swimming shorts, a thermal long sleeved top and a pair of waking boots). He found one but it was closed, so asked a couple of policemen whether they knew if there were any others. The policemen then insisted on escorting him in his silly outfit around the city centre, from one closed laundrette to he next, all the time carrying their machine guns, until they found one open half an hour later. All with curious onlookers of course.

We have now said farewell to Lander here in Trabzon as he needs to wait for visas, but have left him in the capable hands of two other cyclists who are heading in his direction. Very sad to see him go. For us it’s back onto the monster coastal highway for three more days until the Georgian border, where we can celebrate with a glass of this famous Georgian red wine everybody keeps telling us about. 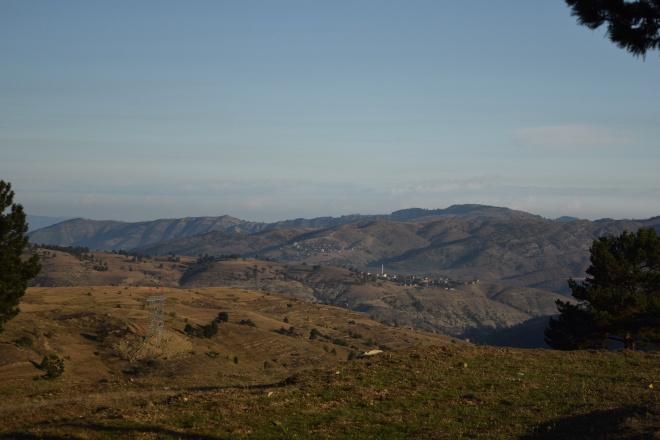 Some nice scenery for you…