For the past five months we’ve been sitting out the winter teaching English in Kyrgyzstan- as part of the wider trip of traversing part of the world by bicycle.

This little-heard-of country has plenty to offer but don’t be put off by its seemingly unpronounceable name. Although  Kyrgyzstan  looks like an inelegant splurge of consonants you’d find dished up to you in a serving of Scrabble, it’s actually pretty easy to say it. KUR-GISS-STAN.  Now everyone repeat.

We chose Kyrgyzstan as the place to sit out the winter for two principle reasons. First, the visa-free regime makes it an instantly attractive offer. Secondly, Google told us that it has some of the best countryside in Central Asia. Central Asia being the geographical location where we would start to hit the cold snap. It’s also worth noting that compared with other Central Asian countries, Kyrgyzstan is considered the most democratic (not to be confused with democratic.) The country has two official languages: Kyrgyz and Russian, the former being reinstated in the 1990s as an official language.

The objective of our stay (aside from avoiding freezing our ball bearings off that is) was to earn money; enough money for the stay there to pay for itself. We didn’t waste too much time enjoying the comforts of cooked breakfasts, running water, indoor toilets and pubs that our new-found-city-life offered so we set about looking for teaching work straight away. We had no idea how easy this would be. We had already sent out speculative e-mails to language centres back in July but this didn’t produce any worthwhile results. Our stay here relied on being able to earn.

Turns out it wasn’t too difficult. On day two, we realised we were a honeypot in Beeland; we simply had to be heard speaking English in order to generate interest from locals. While we were buying sim cards, we bagged our first student from the saleswoman herself. One day a kid even followed us off the bus to beg us to teach him. Then it was a case of putting up adverts on the local Internet forums. Our phone never stopped ringing. We did some work for an English centre but the quality was horrific and they insisted we had to follow their awful methods so we left after a few lessons. That put us off working for anyone but ourselves. We weren’t qualified teachers, but we could do a better job than some of the courses around town, that was for sure.

We did do some work for one reputable language school where foreign businessmen and diplomats sent their offspring. We were pretty much given a blank slate to teach whatever we wanted for the school’s extra curricular activity programme so Carmen fulfilled one of her ambitions of teaching a choir. I did arty crafty things with kids ranging from 6 to 12. The enthusiasm and outstanding behaviour in the kids run throughout the school and we looked forward to going there each time. The kids were brilliant. One seven year-old even broke the teacher’s wall and began questioning our teaching methods. 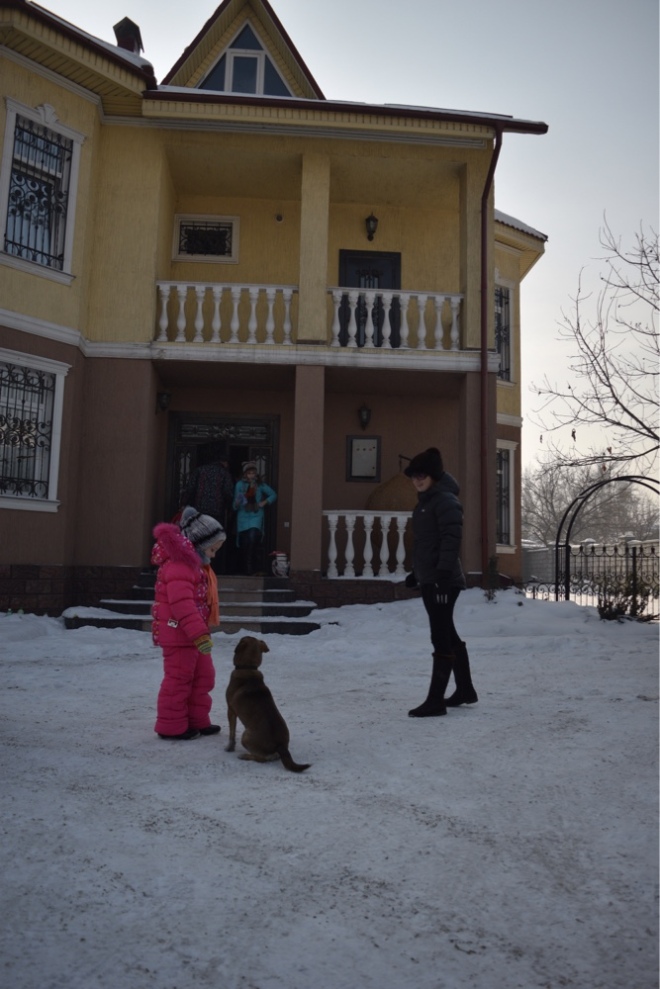 2.4 children. Our host family with whom we were lucky to lodge with during our stay

So we quickly became part of the Bishkek daily grind. Wikitravel sums up the country’s capital with fair words:

It is a relatively new city and has limited historical sites. It is however, an interesting example of a czarist planned city; laid on a grid with wide boulevards flanked by irrigation canals and large trees, buildings with marble façades, and Soviet apartment complexes.  It is more or less a museum relic of the former Soviet Union Bloc. (It) has its own kind of charm, which often arouses nostalgia in people who knew the old Soviet Union.

Our favourite activity in the city was attending the Ballet and Opera house. The whole evening was like stepping in to the 50s. The evening stood frozen in time with the building’s great marble architecture, attendants wearing their Soviet costumes, elegantly dressed spectators, bars with cheap beer and snacks as well as slightly out-of-sync dancers. All for £2.50. There are plenty of the usual bars and cafes you’d get in any city around the world. One amusing aspect was the city’s disregard for anything copyright. TGI Friday’s lawyer visited one of the branches here when we first arrived. He was so impressed with the replica branding that he apparently congratulated their efforts before issuing a cease and decist notice. German bars seems to be a theme here, as well as German supermarkets. Which was great because we got to taste microbrewery beer at a fraction of the price of the real Euro thing. One bar we used to go to would inform us that beer was free all evening. Quite how their business model plugs into British drinking culture, I’m not sure. 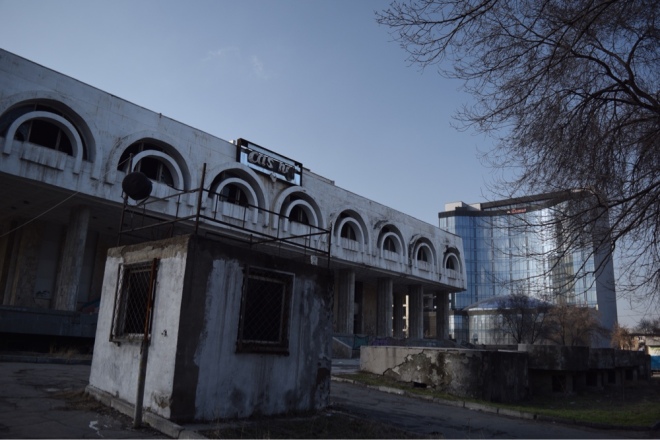 One of the greatest things about living in Bishkek, was the ability to get out of Bishkek. Although the city is nicely lined with green spaces, every other weekend we’d go off with the local Trekking Union group, often only a short drive away into the mountains which encircle the city itself. For next to nothing, you’d get transported to a gorge, guided around and brought back the same day after picnicking surrounded by spectacular scenery. The country boasts possibly the best countryside we’ve seen on our trip. It’s undeveloped so you can get out there and see no safety railings, shops nor people. You can be spoilt to your own private canyon, as we once were when we cycled through a gorge, left our gear with a farmer and then hiked up to Bom canyon and slept two nights in our tent. Indeed, any western notion of Health and Safety is irrelevant as we found ourselves, guided and alone alike, scrambling up steep hillsides, some with fatal drops a mere shoe-slip away.

Kegety gorge: this is where Carmen realised her fear of “heights” 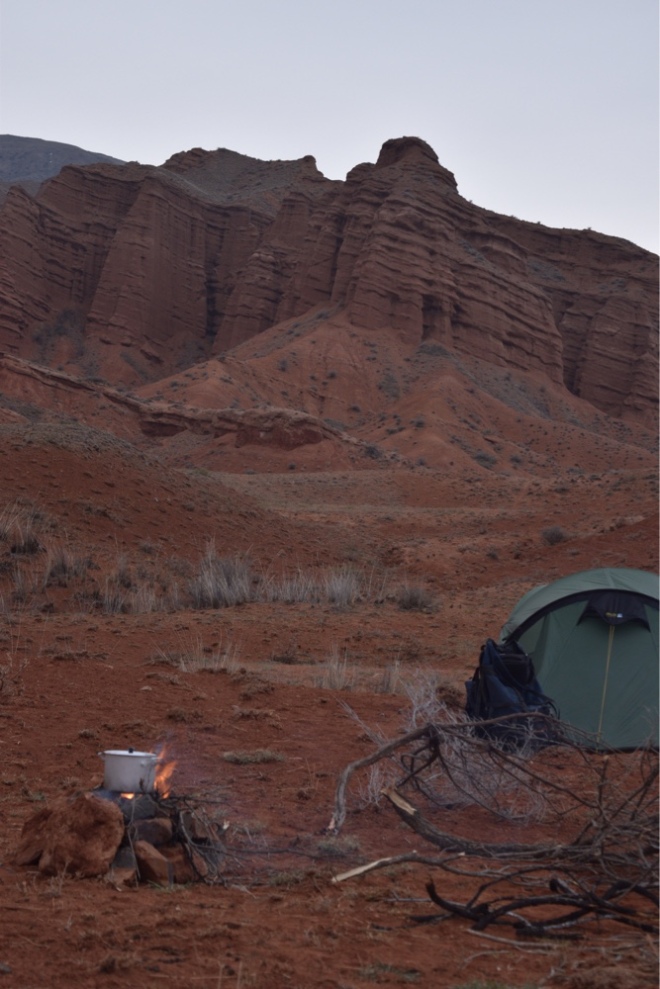 Ask any Kyrgyzstan citizen where to visit and they will proudly declare Issy-Kul as the must-see. We remained sceptical; expecting the resort and development that lakes often attract but we found we could avoid these eyesores entirely by visiting the south shore of the lake, which was stunning. Again, spoilt for choice with plenty of quiet beaches on which to camp. It helped of course that we’d chosen to cycle around the lake off-season (when it was still as low as -12 celcius one night in March). The lake itself is at 1600m altitude, 180km long and sits perfectly nested within sharp mountains whose white tops contrasted perfectly with the water’s outstandingly saturated blue colour. 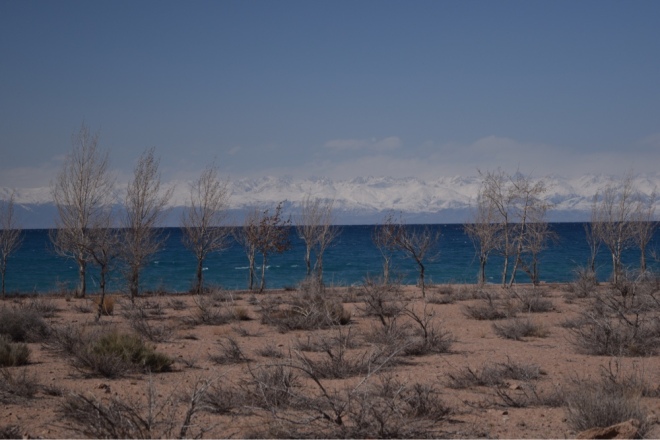 At the eastern point of the lake lies Karakol, the friendly base town from where people flock to go either skiing or horse trekking. We decided to hire a horse each for two days with a guide to take us up into the remote Altyn Arashan at 2400 metres. After a six-hour ride up into breathtaking white wilderness we arrived, me with an exhausted backside, and relaxed in the natural hot springs before cooking on a fire in a cabin and sleeping the night there. Carmen got to play her beloved game of chess all evening with the cabin owner, though I have no reason to believe that she wasn’t hoping to play with something else of his that night as she declared him to be “very sexy”.  The two days horse trekking set us back about £60 each.

Trekking Union also organised single and multi-day ski trips. Carmen was able to try her legs at it for the first time and over four weekends she gained the confidence to come down some rather steep slopes with me. The best resort for advanced skiiers is near Karakol, only 150km from the Chinese border; the USSR would send their Olympians for training there. Of course by Alpine standards, it doesn’t compare in terms of expanse but it was big enough for me to go off piste for the first time and it felt like I had the slopes to myself many times. At the highest point, the white slopes before and below you blended with the white skies leading to blind-skiing down very steep parts. There was no one else up there the two occasions I went up and all I could hear was the whistling of the wind. Quite scary but excellent fun. 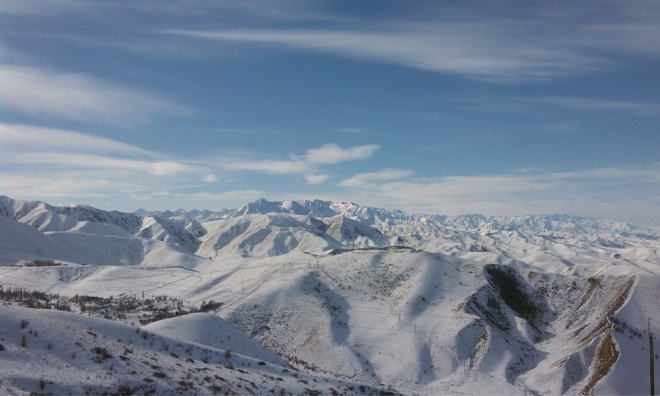 We cherished our weekends greatly. In retrospect, there was always something cheap to do. In total we attended six hikes and four ski trips. The two biggest irritations of living there were the congealed slippery pavements during the freezing months and the cramped transit vans used as public transport.

So did we fulfill our objective ? Well yes and no. We managed to do more than break-even and actually by the time we finished working we had about £400 of savings. But we blew most of that on seeing more of the country itself. So we left the country with a little less money than we had entered with but with the added bonus of having plenty of fun, and we also met some great people along the way.

Click on a thumbnail below to load the extended picture gallery. A Flikr image gallery of our trip so far is also available by clicking on the photos menu on this blog.

Jonas standing on Ala Archa gorge

Cooking on the fire

Carmen going for a walk

The many faces watching you

View from the pistes

Iced lake: a good place to chat with your friends

Ainura and Alina, helping the Bishkek feminist cause

A day out with Trekking Union

being followed by a friendly Central Asian Ovtcharka dog

Located about 25km from the main road